We Need to Talk About the Zimmerman Verdict

Not Guilty was the correct verdict in the George Zimmerman trial.  That is my firm belief, based on the definition of the charges and of self-defense under Florida law, on the sum of the evidence and testimony presented in the trial, which I followed closely, and on the prosecution’s utter failure to prove beyond a reasonable doubt pretty much anything.

How a reasoning, informed person could see otherwise baffles me.  Yet many of you, my friends, colleagues and acquaintances, have expressed dismay, disbelief, and rage that Zimmerman was exonerated.  I suggest that your belief in Zimmerman’s guilt is founded on false information, ignorance of the law, &/or faulty logic.  I will attempt here to disabuse you of those.

With alarming frequency, people impute malevolent motives to those who disagree with them.  Since my facts and logic are impeccable, people assume, anyone who disagrees must be a vile [___]-ist.  Dividing us into camps of Good vs. Evil is wrong, it is highly corrosive, and it must end now.

I invite and encourage all of you to debate this important topic with me.  Our first impulse may be to sweep it all under rug, but I earnestly believe that unless we discuss it openly and civilly, things will only fester.  We need to talk.  Show me where my knowledge is deficient, expose my logic as fallacious.  I’d never hold it against you to question what’s inside my head.  I will if you question what’s in my heart.

Despite rampant speculation, extrapolation, and conjecture, there’s very little of the events of the evening of February 26, 2012 that we know for certain.  We do know that George Zimmerman (“GZ”), a member of the local neighborhood watch, called 911 about an unknown person he believed to be acting suspiciously.  We know his neighborhood had recently suffered a spate of burglaries and home invasions, something that concerned GZ.  As he exited his car and attempted to locate the person in the heavy downpour that night, GZ stayed on line while awaiting the arrival of the police officer he’d requested. Though not required by law to comply with the advisements of a dispatch operator, GZ did indicate he was following the dispatcher’s suggestion to not actively follow the suspicious person.

We know that Trayvon Martin (“TM”) was walking through the neighborhood that night, returning from a trip to the store.  His friend testified that while on the phone with her that night, TM mentioned an unknown person checking him out, expressed his concern, and his intent to run home.

Approximately four minutes later, GZ and TM encountered each other. It’s unsure if one or the other intentionally precipitated the contact, or whether it was by chance.  Per GZ’s testimony, TM approached him, then punched him without provocation. A police photo and a doctor’s exam showed that GZ received extensive injuries about the face and head, including a broken nose and gashes on the back of his scalp.  The coroner found no fight injuries on TM except some scrapes on the knuckles, consistent with using his fists.  The single eye-witness described GZ laying on his back, TM straddling GZ and furiously beating him.

In a 911 recording we can hear what witnesses confirmed: someone screaming desperately for help for almost a minute.  When questioned by police, TM’s father and brother were unable to identify the voice.  In court they and TM’s mother testified it was TM.  Numerous people in GZ’s circle testified that the voice was GZ’s.

We know GZ shot TM, killing him with a single bullet.

The entire incident, from GZ calling 911, to TM receiving a gunshot wound to the chest, lasted about seven minutes.

After questioning GZ, the police found no grounds for arrest.  After reviewing the case, the DA found no reason to convene a grand jury.  Responding to public pressure and meddling by the DoJ, Florida assigned a special prosecutor, who filed a charge of Second Degree Murder against GZ, considered excessive by most legal experts.  Just before the jury was set to deliberate, a lesser charge of Manslaughter was presented for them to consider.

All of us are familiar with the phrase “presumed innocent until proven guilty.”  In a civil case, only a preponderance of evidence is required to reach a judgment.  In a criminal case, guilt must  be proven “beyond, and to the exclusion of, a reasonable doubt.”.   If we stray from these principles, if we no longer recoil at the thought of punishing an innocent person, either out of emotion or the ‘desire to send a message’, we sell our liberty cheap.

Florida law is explicit in what must be proven for Murder 2:

A “series of related actions” may constitute an act if “arising from and performed pursuant to a single design or purpose.”  An act is “imminently dangerous to another and demonstrating a depraved mind” only if:

GZ committed no crime that evening.  He was well within his legal rights to walk through his neighborhood.  He had the right to follow an unknown person, and challenge them, if that’s what he did.  GZ was licensed to carry a gun, and was operating it properly.

To presume guilt, you must prove beyond reasonable doubt that GZ either committed a crime, or was acting in a way no reasonable person would ever act.

GZ’s actions cannot be interpreted as pursuant to any “single design or purpose” other than identifying a stranger.  That GZ had resolved to shoot someone that night is completely unsupported by evidence.  If you haven’t listened to the entire 911 call, do so.

To presume guilt, you must rule out all possible alternative interpretations of GZ actions.

Neither do GZ’s actions, nor his personal character as revealed by witnesses, point to “a depraved mind without regard for human life.”

To presume guilt, you must prove beyond reasonable doubt that GZ possessed a depraved mind.

The jury was also allowed to consider the lesser charge of Manslaughter:

Judge Nelson’s instructions to the jury were meticulous in laying out the considerable burden of proof, and deserve quoting in full:

Each of us has a duty to act reasonably toward others. If there is a violation of that duty, without any conscious intention to harm, that violation is negligence. But culpable negligence is more than a failure to use ordinary care toward others. In order for negligence to be culpable, it must be gross and flagrant. Culpable negligence is a course of conduct showing reckless disregard of human life, or of the safety of persons exposed to its dangerous effects, or such an entire want of care as to raise a presumption of a conscious indifference to consequences, or which shows wantonness or recklessness, or a grossly careless disregard for the safety and welfare of the public, or such an indifference to the rights of others as is equivalent to an intentional violation of such rights.

The negligent act or omission must have been committed with an utter disregard for the safety of others. Culpable negligence is consciously doing an act or following a course of conduct that the defendant must have known, or reasonably should have known, was likely to cause death or great bodily injury.

GZ was not obliged to curtail his movements simply because there was a chance the stranger might punch him.  (There is no “eggshell ego” principle).

To presume guilt, you must prove beyond a reasonable doubt that GZ must have known his actions would likely result in a death.

Contrary to popular belief, GZ did not invoke Florida’s Stand Your Ground Law.  GZ claimed he was unable to retreat, so his act of self-defense was Justifiable Homicide:

The killing of a human being is justifiable homicide and lawful if necessarily done while resisting an attempt to murder or commit a felony upon the defendant….

To presume guilt, you must prove that, after his nose had been broken and while his head was being slammed against the pavement, GZ’s “fear of imminent peril of death or great bodily harm” was not reasonable.

“Ah, well, technically…” you may mutter, while remaining unhappy with the verdict.  I suspect that’s because ‘you’ve got the wrong guy’, as the line in the old crime dramas used to go.  Two wrong guys, actually.

Within hours of the news breaking, the media and other agitators were spinning a tale about it.  Some crazed, racist vigilante had hunted down a little black boy clutching a bag of candy.  Yet again.  Blacks were outraged; whites both shamed and ashamed.

That tale was false, concocted from bits of biases, stereotypes, resentments, misinformation, and a whole slew of lies.  The very first lie (one still being repeated to this day) was the photo released of the departed, a cherubic thirteen year-old:

To get a true perspective of the physical bulk of this “boy”, look , if you can, at the crime scene photo.

What you never learned if you only watched    MSNBC, what the jury never got to hear, was that TM was serving a 10-day expulsion from school, his third.  That he’d recently been caught with stolen jewelry.  That he’d boasted on twitter about punching a school-bus driver, and how he’d learned to drop someone with a sucker-punch.  That he’d been caught at school carrying marijuana and that the coroner found THC in his system.  That the skittles and fruit-flavored soft drink he was carrying were actually two of the three ingredients (along with codeine cough syrup) for “Lean” or “Purple Drank”, a trendy & intoxicating rapper’s concoction TM used to talk about making.

The first blow to the Zimmerman-as-racist fable came when his photo was released.   The distinctly latino features failed to match their cartoon-image of a racist. The hate-mongers quickly ‘pivoted’, labeling GZ a “white-” or “self-described” hispanic.  In the same way we describe our president as “half-white” or a “self-described black.”  MSNBC lent a helping hand by editing GZ’s 911 call to make him sound racist.

Then, as more kept coming out that belied the racist slander — GZ has black relatives, mentored a young black teenager, spoke out against police brutality against a black suspect, has several black friends, is a registered Democrat!!! — the smears shifted to framing him as some frustrated, out-of-control “cop wannabe.”  That caricature, too, was resoundingly undermined.  If you haven’t yet listened to the testimony of the many character witnesses who spoke on GZ’s behalf, do so.

All that was despicable, but let’s not lose focus on the crux of the matter. GZ had nothing to prove.  Perhaps you find him creepy, inept, whatever.  Doesn’t matter. You don’t need to like George Zimmerman to conclude his innocence.  You only need a reasonable doubt about his guilt, and there is an ocean of doubt.  Finally, and most importantly:  you, me, all of us — need to adhere to our Law, or we all lose our freedom.

Update 7.23.13:  Some have questioned what caused the Sanford Police to treat the the incident as self-defense.  Here, a photo taken by police of GZ just after he was brought in for questioning: 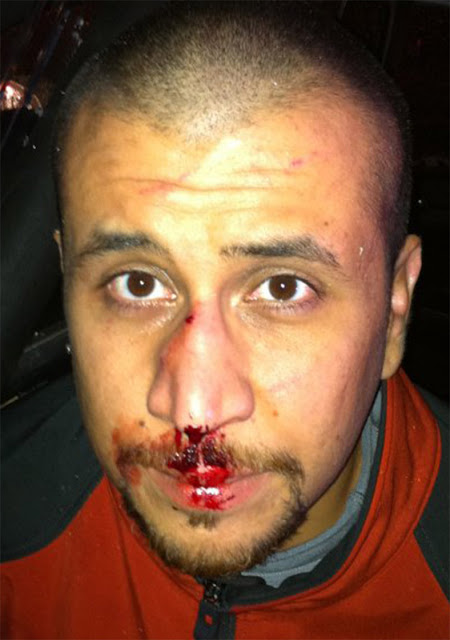